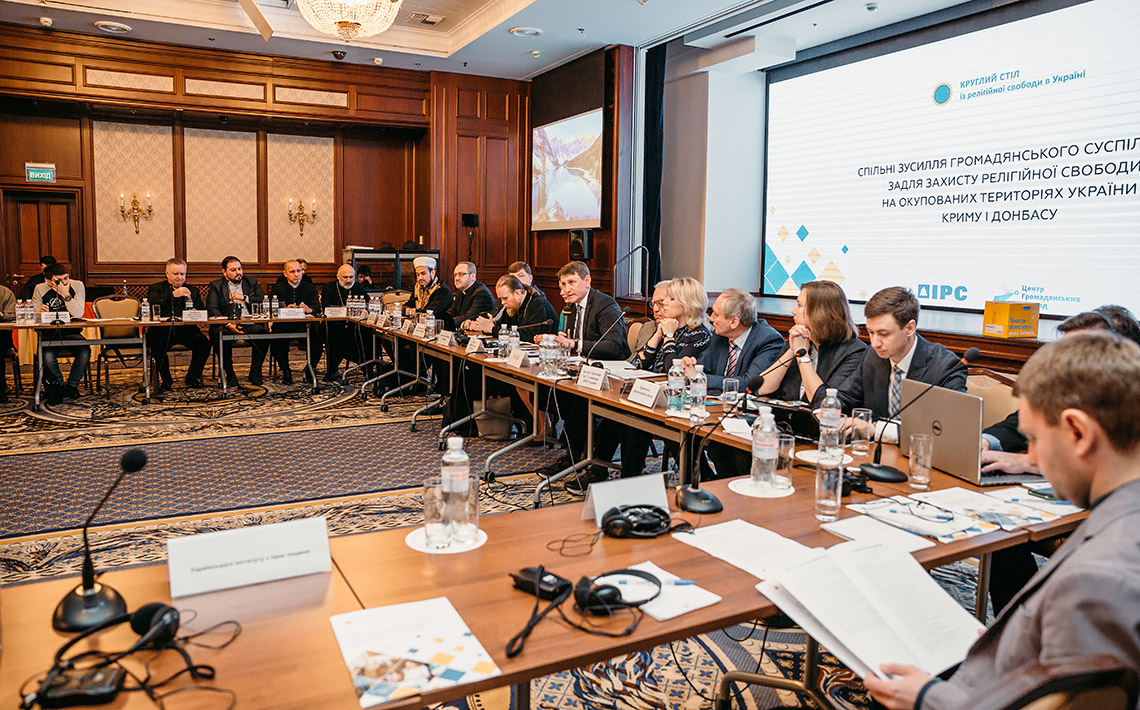 The outcome was the decision of the participants in the meeting to establish a permanently functioning Religious Freedom Roundtable in Ukraine that will become a platform for the dialogue between various representatives of the civil society, primarily between religious and human rights organizations involving experts and officials in this dialogue.

The other practical result of the first Roundtable meeting became the joint Resolution on religious freedom in the Ukrainian territories of the Crimea and Donbas occupied by the Russian Federationundefined. This Resolution was presented on May 14, 2019, in the press center in Kyiv. The event was covered by almost 40 representatives of media and was also live broadcast in Ukrainian and English via the YouTube platform. The Secretariat of the Roundtable sent this Resolution to the embassies of the foreign states that are members of the PACE, OSCE, and also the Group of Seven.

On July 11, 2019, a website ReligiousFreedom.in.ua was launched; it covers the activities of the Religious Freedom Roundtable in Ukraine. The Roundtable website contains information about the objective, activity principles and current list of the Roundtable participants, informs about the events that were held and are planned to be held, and also acquaints the general public with the documents adopted by the participants of the Roundtable. All materials are available in Ukrainian, English and Russian.

On July 25, 2019, the second expanded meeting of the Religious Freedom Roundtable in Ukraine was held in Kyiv. It was devoted to the topic "Joint efforts of the civil society to release citizens of Ukraine unlawfully deprived of liberty in Russia, the occupied Crimea and Donbas". Representatives of the non-governmental organizations who are involved in the issues of release and protection of rights of the Ukrainian prisoners of war and other prisoners of the Kremlin, as well as subject-matter experts of the Ministry of the Temporarily Occupied Territories of Ukraine, National Police of Ukraine, Ukrainian Parliament Commissioner for Human Rights, Security Service of Ukraine, Ministry of Culture of Ukraine participated in the event.

On November 18, 2019, the third extended meeting of the Religious Freedom Roundtable in Ukraine took place. Religious and public figures, as well as officials and representatives of the international organizations, discussed further cooperation in releasing of the Ukrainian citizens, prisoners and detainees as a result of the Russian aggression, and their return to the public life. The other discussion topic was the issue of the better cooperation of religious and non-governmental organizations as well as Ukrainian authorities with the international institutions (UN, OSCE, the Council of Europe, EU, etc.) on ensuring remedies for believers and religious communities in the occupied territories of the Crimea and Donbas.

The result of the third meeting of the Roundtable was the agreement of the Roundtable participants to develop an Action Plan that included all events and initiatives announced during the discussion. The document comprises 10 clauses some of which were implemented in December 2019 while the majority of issues will become a focus for the activities of the Roundtable during 2020.

On December 11, 2019, the workshop "How to document religious prosecution in the occupied territories of Ukraine" took place in Kyiv. Religious figures of various denominations, lawyers and activists of non-governmental organizations took part in the event. Participants of the workshop gained basic knowledge on the methodology of documenting the facts of religious prosecution, their safe storage and ways of distributing them in the amount enabling not to harm believers in the occupied territories of Ukraine and to protect their rights.

In the period between the public meetings of the Religious Freedom Roundtable in Ukraine, four working sessions of the Secretariat were held involving some participants of the Roundtable to analyze the effectiveness of the events undertaken and plan further work.

A moderator of the Roundtable Mr. Oleksandr Zaiets, the Board Chairman of the Institute for Religious Freedom, organizes regular consultative meetings with religious figures aimed at the agreement of the positions of various denominations and mediation to find the consensus on problematic issues that are listed on the Roundtable agenda. The Secretariat of the Roundtable also provides for permanent communication between all the participants and invited guests, informs on the planned events and their results.