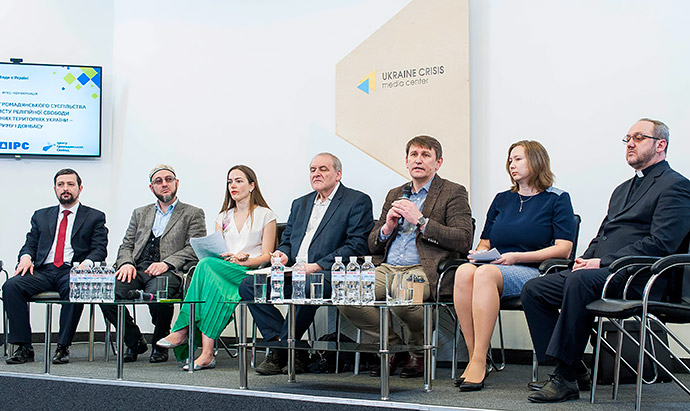 Resolution: Russia is responsible for religious oppression in the occupied Crimea and Donbas

The complete de-occupation of the Ukrainian territories of Crimea and Donbas will stop the brutal persecution of believers from different denominations caused by Russia's occupation authorities and will restore religious freedom.

This was announced in a Resolution of the Religious Freedom Roundtable in Ukraine issued on May 14, 2019 in Kyiv.

"The annexation of Crimea led to numerous violations of religious freedom. The forcibly imposed Russian legislation is widely used to persecute religious communities and individual believers. Russia’s so-called anti-extremist legislation contravenes international standards and is used for groundless accusations and persecutions of believers and religious communities," the Resolution states.

At the same time, the situation in the occupied territories of the Donbas is even worse: most of the religious communities simply ceased to exist, and freedom of thought, conscience and religion is not present as a phenomenon.

Somewhere, like during the period of the Soviet regime, believers of certain denominations are forced to gather underground, to have the opportunity for joint prayers to study the religious doctrines and to fulfil religious ceremonies.

Dozens of church buildings, prayer houses and places of worship have been captured and are now under the control of illegal armed units of the so-called “DPR” and “LPR”, supported by Russia.

Practices of abduction, torture and extrajudicial executions of clerics and individual believers of most confessions, except the Orthodox Church of the Moscow Patriarchate, are widespread.

"As a result of the deliberate policy of terror by the occupation authorities, which copies the judicial arbitrariness and repressive laws of Russia, most clergies together with their families left the occupied Donbas," said human rights defenders and religious figures of Ukraine.

Religious Freedom Roundtable in Ukraine requires the Russian Federation to take measures for the de-occupation of the Ukrainian territories of Crimea and Donbas and the cessation of their offensive on the freedom of religion, as well as the immediate release of all Ukrainian citizens imprisoned on grounds of professing their religious beliefs, which is a direct violation of the Article 9 of the European Convention on Human Rights.

In addition, the resolution calls on the UN member states to initiate a public report on the situation of freedom of thought, conscience and religion in the occupied Ukrainian territories of Crimea and Donbas in order to present it at specially organized hearings in the UN, the Council of Europe, the OSCE, the EU and the United States.

The initiators of the Resolution also request the appointment of an EU Special Representative for the Occupied Ukrainian Territories of Crimea and the Donbas to carry out continuous monitoring concerning of the situation concerning the violation of human rights and to report it publicly and periodically to the EU Council.

The Resolution was supported by 50 participants of the Religious Freedom Roundtable in Ukraine, among which 25 churches and religious organizations and 25 human rights and other NGOs.

Recall that the Religious Freedom Roundtable in Ukraine was established on April 16, 2019 in Kyiv by the participants of the first meeting, which decided to unite the efforts of the religious associations and human rights defenders, with the involvement of scientists and the government officials in the affirmation of religious freedom and peace building.

The full text of the Resolution is available at the following links:

In the press conference on which the Resolution of the Religious Freedom Roundtable in Ukraine was published, took part:

• Fr. Oleksa Petriv, Head of the Department of Foreign Relations in Ukraine, Mitrophorist Archpriest of the Ukrainian Greek Catholic Church;

• Gennadii Bilorytskyi, representative of the Union of Jewish Religious Organizations of Ukraine, legal advisor to the Chief Rabbi of Kyiv and Ukraine;

• Sheikh Rustam Gafuri, Deputy Mufti of the Religious Administration of Muslims of Ukraine;

• Olexandra Matviychuk, Head of the Board of the Center for Civil Liberties;