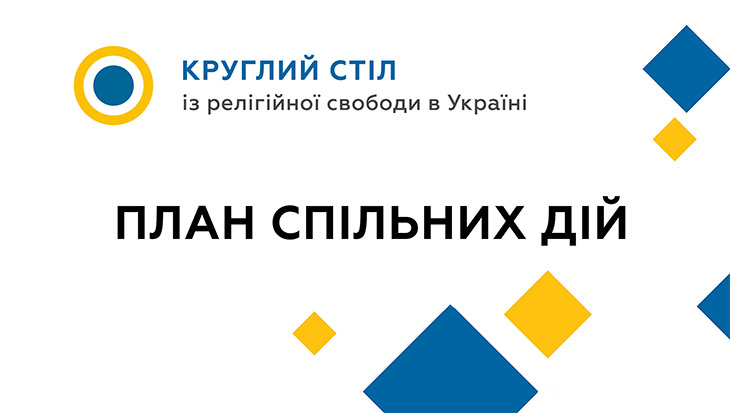 1. Exchange information continuously between the religious and human rights communities, as well as with government authorities on the international events, attendance of which would be expedient for religious figures and human rights defenders in order to convey to the international community unbiased information about the religious situation in Ukraine, particularly in the Russian-occupied territories of Crimea and Donbas, as well as share with other Roundtable participants the outcomes of attendance at such events (the Roundtable Secretariat shall contribute such mutual communication).

2. Conduct advocacy, at the 26th OSCE Ministerial Council in December 2019 and at the winter session of the Parliamentary Assembly of the Council of Europe in January 2020, for the recommendations contained in two resolutions adopted by the Religious Freedom Roundtable in Ukraine.

3. Analyze the available experience of the social casework system adopted by religious and non-governmental organizations for the families of POWs or persons held in captivity following the Russian aggression (pastoral care, psychological assistance, employment, renewal of documents, addressing domestic problems, etc.). Based on this, develop a pilot project encompassing ten families, following which, promote best practices of social casework across a wider range of religious organizations and affected families.

4. Set up a joint task group to document new instances of religious persecution in the Russian-occupied Ukrainian territories of Crimea and Donbas and notify international organizations thereof promptly.

5. In 2020, present at the European Parliament and at the annual Human Dimension Implementation Meeting of OSCE in Warsaw a report by human rights organizations about freedom of religion in the occupied Ukrainian territories of Crimea and Donbas.

6. Prepare a joint appeal by the Roundtable participants concerning the need to implement the provisions of the Law of Ukraine “On the Legal Status of Missing Persons”, especially those related to setting up a register of missing persons and victims of Russian aggression.

7. Organize meetings with parliamentary factions, to be attended by persons released from captivity, in support of the draft Law No. 0892 designed to criminalize crimes against humanity and to bring liability for war crimes in line with international law.

8. Set up a register of persons responsible for religion-based crimes in the Russian-occupied Ukrainian territories of Crimea and Donbas with the purpose of their prosecution and imposition of personal sanctions by the Government of Ukraine and foreign governments, modelled on the Magnitsky Act.

9. As part of the National Human Rights Non-Conference to be held on December 10–11, 2019 in Kyiv, hold a workshop dedicated to documenting persecution on religious grounds.

10. Schedule the next meeting of the Religious Freedom Roundtable in Ukraine, to be attended by representatives of various parliamentary factions of the Parliament of Ukraine (tentatively in February 2020).

The Action Plan was developed following the third meeting of the Religious Freedom Roundtable in Ukraine which was held in Kyiv on November 18, 2019.