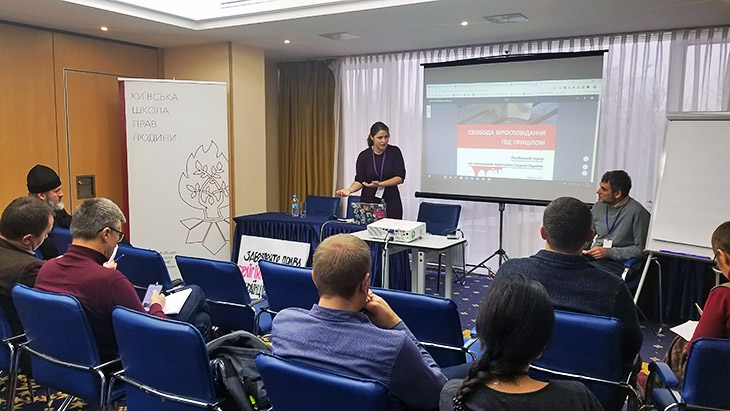 The workshop "How to document religious prosecutions in the occupied territories of Ukraine" involved religious figures, lawyers and human rights activists.

The event was held on December 11, 2019 in Kyiv within the Religious Freedom Roundtable in Ukraine and the National Human Rights NONconference.

The speakers of the workshop were Oleksandra Romantsova, Executive Director of the Centre for Civil Liberties, and Oleksii Bida, Head of the Documentation Centre of the Ukrainian Helsinki Human Rights Union.

"We believe that documenting and spreading (in the permitted amount) information on religious prosecution is significant to ensure that these crimes do not go unnoticed and unpunished, and the efforts of the international community protect lives and rights of the believers, promote the restoration of the religious freedom and return of the seized church property," emphasized Oleksandr Zaiets, Moderator of the Roundtable, the Board Chairman of the Institute for Religious Freedom.

Participants of the workshop gained basic knowledge on the methodology of documenting the facts of religious prosecution, their safe storage and ways of distributing them in the amount enabling not to harm believers and faith-based communities in the occupied territories of Ukraine, but to protect their rights.

"It is essential not only to document each fact of religious prosecutions in the occupied territories, but also to bring these cases to court including courts of the international jurisdiction, to legally certify the facts of religious-based crimes. Only in such a way it is possible to protect the rights and lives of believers who are subjected to pressure," shared his impressions after the workshop Archbishop of Simferopol and the Crimea of the Orthodox Church of Ukraine Klyment, Head of the Orthodox Mission to support the victims of human rights violations and persons deprived of liberty.

The workshop was organized with the support of the Centre for Civil Liberties, the British Embassy in Ukraine and the Institute for Religious Freedom.

This event became the first completed task of the Action Plan developed by the participants of the Religious Freedom Roundtable in Ukraine during the meeting on November 18, 2019.